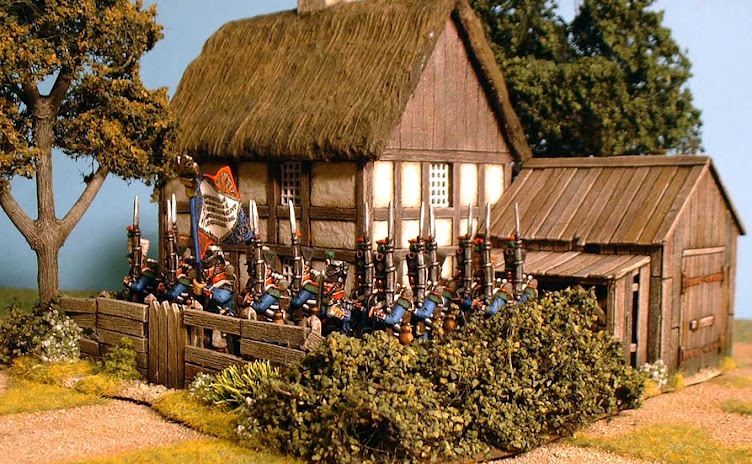 The last of my Belgian buildings is the inn of La Belle Alliance as it stood at the Battle of Waterloo. The model is slightly "condensed", but not as much as you might at first think. There are many near-contemporary images of this place, mostly showing various upward and sideways extensions built after the battle. But this one was painted by a local amateur artist who actually visited it two days after the battle. For the back of the building I had to rely on later images, but this is as good as contemporary source material gets. 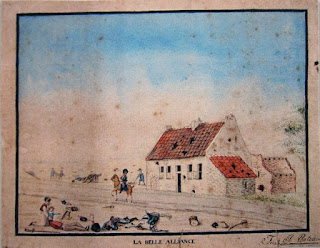 The name of the inn by the way "La Belle Alliance" referred sarcastically to a wedding in the eighteenth century, when a pretty local girl had been married to a businessman who was wealthy but ageing. Perhaps the jealous proprietor of that time fancied he would have made a more appropriate match himself?

Before showing you the pictures, I couldn't resist passing on this surprising written description by two Englishmen who visited the site in July 2015 - and still weren't the first tourists to on the historic scene:

Our travellers now crossed over to La Belle Alliance, which proved to be a hovel of the meanest kind, consisting of four rooms, a passage, and some wretched holes up stairs. There are also some ruinous outhouses, and a well, into which several dead bodies had been thrown. On the gable of the house, the proprietor has painted in large and rude black letters, on a whitewash ground, "Hotel de la Belle Alliance." Near this spot Wellington and Blucher met; and the people show a straw- bottomed chair, on which it is said the former sat down:—at all events it was the head-quarters of Buonaparte during the battle.

The walls of the front rooms in this public-house were completely scribbled over with names, inscriptions, poetry, and drawings: and the whimsical humour that distinguishes the public character of the English, had not been repressed by the awful circumstances of the situation... A Mr. Thomas Jackson had merely left his name for the admiration of posterity: but some other person had appended the remark, that "he was hanged at the last assizes for sheep-stealing!" The portrait of one of the life-guards had been delineated by some friendly hand, in coal-outline: immediately beneath which some fastidious critic in the fine arts, jealous probably of the honour thus paid, had written the words "ugly theef!"

And now at last some pictures of the model. The techniques and materials were as described in my previous post. I tried to get an undulating roof form, as tiles commonly drooped down over their timber supports. I think I got the effect by heavy vertical scoring on the back with the Stanley knife. 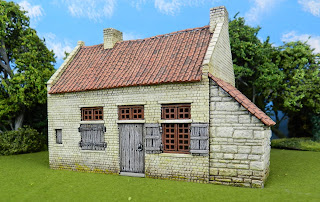 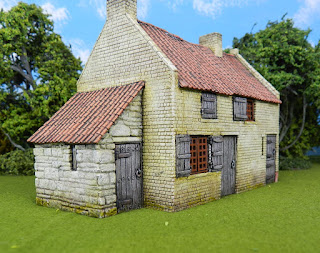 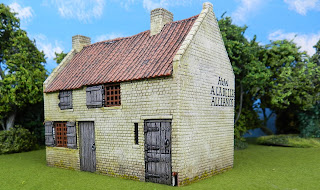 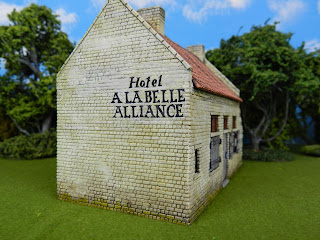