You Can't have Too Many Trees

Work In Progress update: the baroque Chateau is all made now and about 2/3 painted, so it should be ready to show you in a week or so. I would venture to suggest you will like it, as it's one of the most elaborate models I've ever done.

Meanwhile, last year a Franco-Prussian War scenario (the action of Poupry) prompted a major increase in the number of trees I needed, and of wood bases to put them on. We'll look at the wood bases next time, but here's some of the trees. I realised my old wood units ( see The Woods and the Trees under the "Terrain" label) were past their best after 20-odd years of being bashed around, so retrieved those individual trees which could be salvaged. Between those and the new ones, I ended up doing over 50 trees for the gaming table in one go. There's not much point showing you all of them, but here's some of the interesting ones. I've explained how I make trees pretty much before, and will do a proper tutorial at some point, so won't explain the basic method again here. 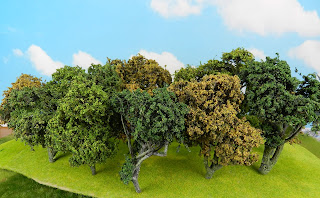 Most of the trees are individually based, but some have pins fitted into the trunk instead. The pins go through a wood base or whatever, through a cloth and into a blue foam hill or underlying foam sheet. It takes no longer to push them in than to place a based tree in position. 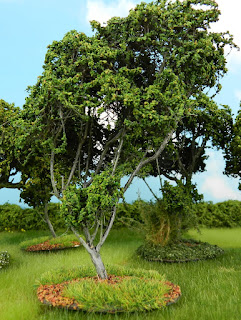 This tree starts from a twig supplied in bulk by Diorama Presepe of Italy, who are in my Links list. I am a bit of a connoisseur of tree-twigs; this one has a lovely branching and re-branching structure, which is what you want. 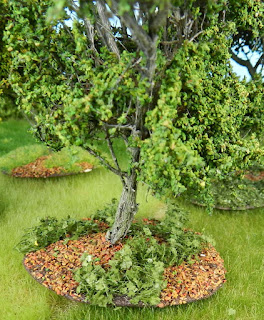 Another Diorama Presepe twig, but what I wanted to show you here was the nice foliage on the base, which comes from MIG, the military modelling suppliers. Not cheap, but I think it has a lovely fresh look to it. 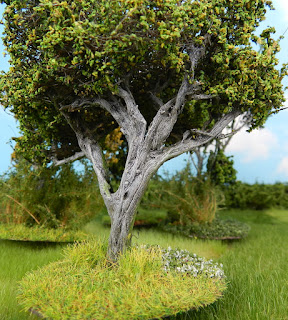 Several of the new trees used sagebrush twigs as the basis. Sagebrush grows wild in some very dry parts of the world and gives a great branching structure, bark texture and natural colour for our puposes. It's a bit fragile, but a spot of superglue fixes any breakages. The biggest problem is sourcing it, at least in the UK. In the US people gather it themselves, or buy it easily from model railway suppliers. I think the same applies in Australia(?) But us Brits really struggle to get hold of the stuff. I got a small batch from my fellow terrain-builder Herb Gundt of Indiana long ago, in exchange for some of my own treemaking supplies, and have had it in a bag for many years. It seemed high time to make use of it. 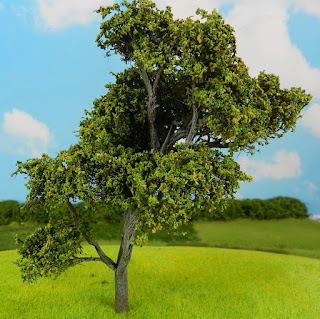 This sagebrush job is pin mounted. A nice upright shape.This is as tall as I like to go with wargames trees, because they have to fit in my storage system of fruit boxes. Long ago I learned to think about storage as part of the planning stage of a model (and of my wargames figures) rather than just making something and then worrying where it's going to go afterwards. I just don't have the space for a more happy-go-lucky approach. 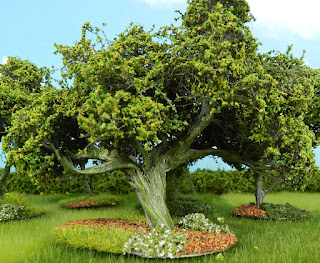 And this last one shows what a good, twisted, knarly, complex shape you can get with this material. One issue is that some twigs need working on to get a reasonably balanced shape, and you may have to start with the trunk at something of an angle to balance the canopy of the tree. In this case too much of the bulk was still on one side, so I think I brass-rodded a smaller twig on to one point to help balance the thing. But the upshot is one of my favourite tree models. 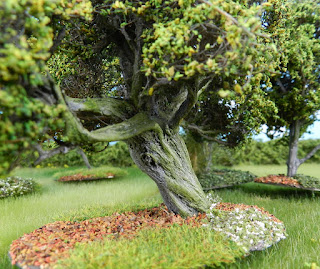 I'd like to keep up a rhythm of something like weekly posts, so here's something simple I made earlier this year. These earthworks were made to a specific shape for a Franco Prussian war refight of the action at Villers Brettoneux in 1870, but the method will work for any shape or number of basic works, useable for games from the 16th to 19th centuries.
Earth would be dug out and piled to a sloping profile behind the trench, usually supported, "revetted" by wicker panels, planking or gabions, ie earth-filled tubes of wickerwork. Most soldiers of those times were from an agricultural background and would be familiar with knocking up fences and so forth out of wicker. Short swords or sword-bayonets would be adequate for cutting the necessary shoots from bushes and trees nearby. The only other tools required were shovels for digging the earth. These might be supplied from the engineers' tool wagons, or given time could be collected from the local peasantry.
I wondered whether these earthworks would be wholly or partially covered in grass. Eventually they would, I'm sure, but how long that would take must have depended on the time of year and the weather. During a rainy spring or summer, greenery must have sprouted up within days, but this wouldn't happen during either dry weather or winter. I didn't have any pictorial reference for a partially grassed over look so decided to leave these ones bare.
The materials used are just triangular-profile strips of blue foam, and Renedra wattle fencing panels glued to the rear. You could use white expanded polystyrene foam, although it's a bit delicate and a card base underneath would be a good idea. In this case I made the revetments with a slight forward slope, but that slowed the process, and isn't really necessary. The fronts are textured with PVA and household filler with sand chucked on top. Paint the earth a colour compatible with your terrain and figure bases. I went to town colouring the revetments, but a couple of drybrushes and a dark wash would give almost the same result.
The troops defending the works below were painted by my friend Garry Broom. They are French second-line troops of 1870/71. Gardes Mobiles are seen in their usual blue and red, and there's an unusual unit of the Garde Nationale Mobilisee, the 1st Regiment of the Legion du Rhone, the "Defenders of Lyons" dressed in black with red piping. This unit fought respectably enough at a couple of actions, but the 2nd Regiment raised was a bit awful. There were even a 3rd and a 4th Regiments who didn't see combat. Which was perhaps just as well. 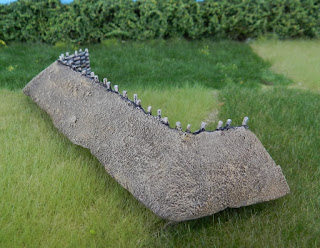 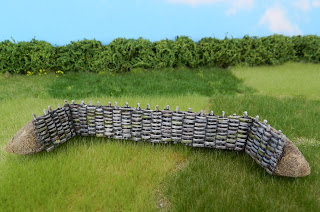 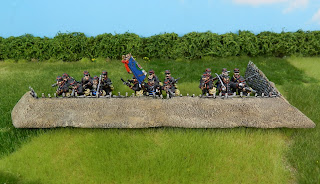 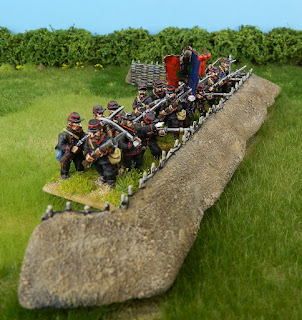 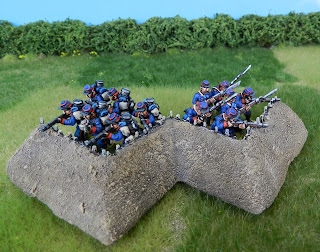