I have just finished making this master model of a French 12-pounder for Michael Perry's Franco-Prussian War range. This one took over forty hours of intense concentration and that's not including the more leisurely time spent in research. I'm happy with the result, in terms of historical accuracy, detail and practicability for the wargamer who is the end customer. But I found this quite heavy going at times, and after the Prussian 6-pounder I have promised to do, I would need a lot of persuading to do any more artillery masters.
The model is built entirely from styrene, apart from the drag-brake chain. (What's that? See below.) I gather some people who build such masters use various modelling putties, and good luck to them, but that approach is outside my skill-set, so to speak. Using styrene strip and rod enables me to trim and sand each of the hundreds of pieces down to an accuracy of a fraction of a millimetre and they are easily assembled with liquid styrene cement. (The main sections of the barrel and trail assemblies are brass-rodded together for strength.) We end up with a master of seven parts in this case: the carriage, the barrel, two wheels, the trail-spike, the elevating screw and the brake chain. These parts are just pushed together here to show what the completed thing will look like
The downside of a styrene master for the manufacturer is that you can't put it into a vulcanising machine to make a production mould, because it won't stand the high temperature involved. So in intermediate stage is required:  The parts are first moulded in resin, which reproduces them very faithfully, and these resin parts will stand up to the heat of the vulcanising process. The customer ends up with a little kit of seven white metal parts to assemble with superglue, but it's obvious where everything goes and there are locating holes and pins on the parts for a positive fit.
The historical gun is formally designated a "Piece de 12 rayee (rifled), Modele 1858", itself a conversion, by adding rifling on the La Hitte principle, of the smoothbore Model 1853 gun-howitzer. The latter had actually been designed by the Emperor Napoleon III himself, quite an artillery expert in his younger years, hence it was known as the "canon de l'Empereur". This was the state of the art when it came to field artillery in the 1850's: a "shell-gun" firing both solid cannonballs and spherical explosive shells. It was copied in the USA as the "12-pounder Napoleon" and served as the mainstay of Civil War artillery. Gun technology was moving forward very fast at this time however, and an officer called La Hitte devised a practical system of rifling that approximately doubled the range. The main field piece built on this principle was the newly-designed 4-pounder, a gun I modelled earlier. It was felt some heavier metal was required for the corps and army-level reserve artillery and so 1853 12-pounders were bored out to fill this role.
Whilst we're on 19th-century artillery-lore, they struggled a bit with terminology at this time. Traditionally guns were designated by the weight of solid iron cannonball they fired, so a 12-pounder fired a ball that actually weighed 12 pounds. The calibre corresponding to this size of shot was around 120mm, but that was first used to designate artillery pieces shortly after the Franco-Prussian War. Gunners were so familiar with the traditional labels that they kept them even when the guns actually started to fire projectiles of quite different weights. Firstly the spherical explosive shell with a timer fuse and then the "cylindro-conical", ie pointy shell with either a timed or "explode on impact" (if you're lucky) fuse. So the gun here fired a shell weighing something like 25 pounds, but it fitted the bore which had once accommodated 12-pound iron cannonballs. That's the real reason for these confused designations, though the water was, and still is, sometimes muddied by the argument that 25 pounds is "basically 12 kilogrammes".
Finally, if your patience with artillery-lore isn't exhausted, I'll explain what the "drag-brake" or "drag shoe", the chain business on the side of 17th to19th artillery pieces is all about. It answers a problem that most of us wouldn't think of. When on the march, if the gun (or a wagon or whatever) is being towed down a sharply-sloped road, it rolls forward and can bang into and injure the nearest pair of horses in the team. So the drag shoe is deployed. It is a kind of skid or ski on the end of a retaining chain, which was fastened underneath one wheel to stop it revolving. You would think they'd need one on both wheels for this to work, but apparently not: the gun skidded and slid down the slope, moved by the tow horses rather than gravity, and at the bottom the drag shoe is hooked up again. This fitting isn't something you often see on a wargames model, and I had to think about how to make it in a way that will cast and can easily be assembled by the customer. But being pleased with the arcane knowledge of what the heck it's for (a secret now shared with you, dear reader), I couldn't resist making an effort to model it. So probably I shouldn't moan about how long it took, should I? 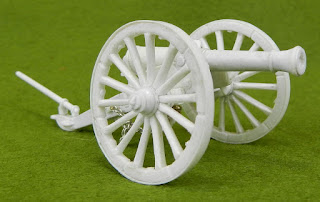 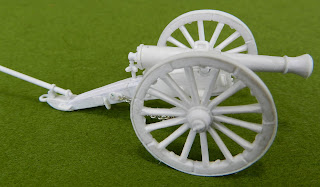 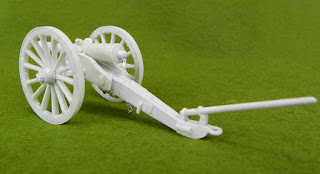 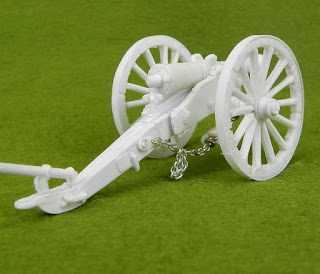 I checked my email earlier this evening to find a nice surprise had arrived. Some of you might recall that back in December I lamented some models having "got away" without ever being photographed. One of them was a German village I made for a friendly customer called Jonathon Marcus, who was for many years an international correspondent for the BBC. Well Jonathon came across my blog, took the trouble to photograph this model and send me the results, which I very much appreciate. I enjoyed poring through these images and being reminded of what I had packed into this model, half of which I had forgotten.

This was about the last piece I made for a customer, probably in about 2010. It represents a village in central Germany: Hesse or Franconia maybe, though many would be happy to call it "generic Germany". This representation wouldn't be out of place from the late Middle ages to 1945. It could be used on the table as the two sides of one village street or else two smaller "village units". There are three houses, a barn, a church and a bunch of rustic features around them. 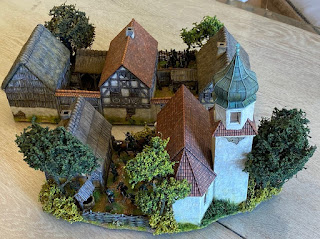 Here's an overall image. The layout of each farm having a courtyard which links it to the next in a continuous facade facing the street is typical of many areas of Germany. I made it so that each enclosed area  would fit one or two of Jonathon's figure bases. 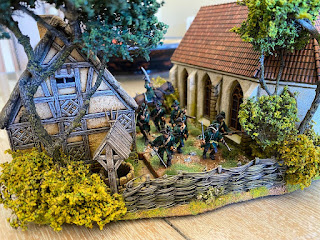 Jaegers of the Seven Years War period are posed with the model, which adds atmosphere and shows scale. I made the wicker fences by weaving some sort of fibres between posts set into the base, the same technique used in the Russian village posted a couple of months back. 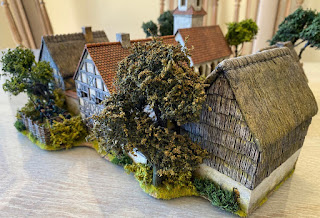 The barn we see here is partially clad in overlapping planks, over the timber-framed construction. We tend to think of barns being made entirely of wood, because that's what we're used to in Britain (and the US even more so), but in most of Europe the same sort of materials were used as for houses and other buildings. 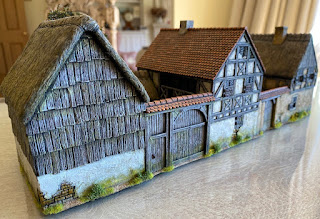 The courtyards commonly had both a person-sized door and a large gate for carts as well. 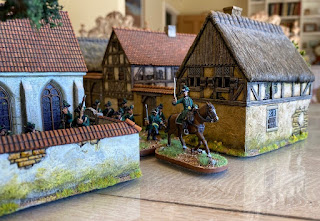 Some of the church details were cannibalised from a model railway kit by Faller. It's given a nice stained glass effect, which you can see here. My model included a walled cemetery, visible in this photo. 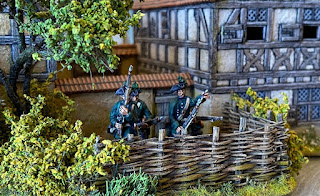 Another fenced enclosure for the riflemen to take cover in. Timber framing and window detailing were quite intense in some places. For the ornamental timberwork you see in some panels, I made master sections then moulded and cast them, which reduced the work a little bit. 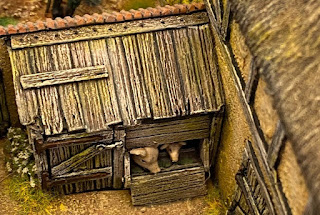 A pigsty forms part of one yard. The occupants have their noses in the feed trough. 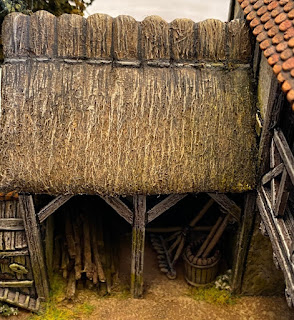 Here's a shed storing farm tools and wood. Partially visible to the left of it is a hen coop. 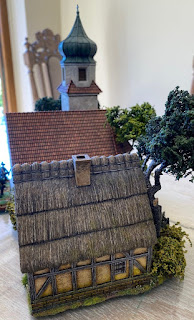 Though I say it myself, this thatched roof has come out rather nicely in texture and colour. I think I used a mixture of materials to make the thatch in this project. This one is "teddy fur", where other roofs look more like the plumbers' hemp insulation material I used to use.

Email ThisBlogThis!Share to TwitterShare to FacebookShare to Pinterest
Labels: Germany

Another laser-cut MDF kit. tarted up for skirmish gaming. This chateau is by Sarissa precision, still available and modestly priced. It's a model you see in a lot of skirmish games, and rightly so. Nit-picking types like me would say that in size terms this isn't really big enough for a chateau, more what the French call a "maison bourgeoise", but never mind. As well as WWII skirmish, I thought this structure wouldn't be out of place in a 1920's Chicago gangster game. I see it with a sign proclaiming the "Hotel de Luxe" or something equally cheesy! 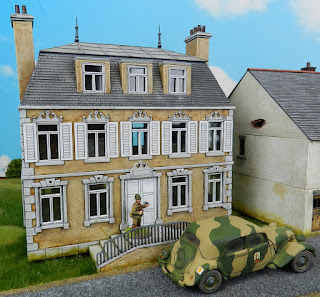 One of the nicest features of this kit as it comes is the window and door surrounds, the kind of thing that laser-cut MDF does best. I did improve most of the other features, adding characteristic tall chimneys, stonework corners ("quoins") and better wall and roof textures. 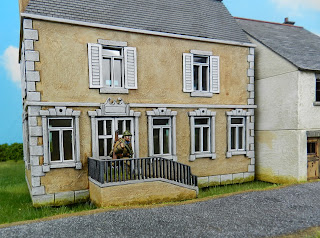 Here's the rear view of the establishment. The rendered walls were done in the same way as on the house posted recently, ie carefully textured household filler. 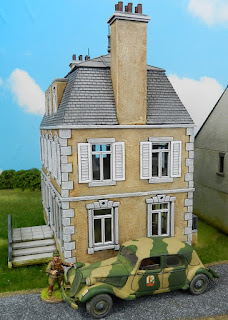 Frome the side, the chimneys are very prominent, as they always are on a chateau. The car is a slightly bigger scale than the building or the figure; it's about 1/43 scale, from someone like Solido. I had bought it cheap along with some French 1/48 military models from Gaso.line. It looks the part as one of the many thousands of civilian cars requisitioned to mobilise the French army in 1940. The badge on the door is that of a Moroccan Tirailleur regiment. Three such units made up the  hard-as-nails Division Maroccaine, just about the toughest formation in this unjustly maligned army. If you can see it at all, the badge comprises a mosque and palm trees over the Etoile Cherifienne, symbolising the Sultanate of Morocco. 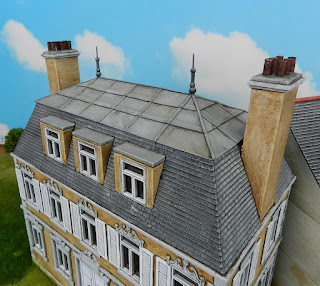 Here you can see how the typically French mansard roof is constructed. The near-vertical outer section is usually covered with slates, but that wouldn't work on the almost flat top section, so metal sheet takes its place: lead, zinc or bronze were the most common materials. The technique of laying this metal sheet holds good for church and other roofs. You have broad sheets overlapping horizontally, then vertical joins with the edges of two sheets folded together. I made the finials from brass rod pushed through a series of small beads from the craft shop. 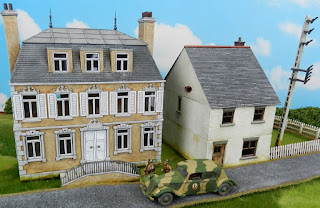 Finally, the two buildings posed together, but I've run out of things to tell you.
The next couple of posts will show some 1940 equipment that I built from scratch, both French and German.