Gangsters' Paradise in the Roaring 20's

2017 was an eventful for me, a good one certainly, but I got out of the way of wargaming and modelmaking for a time. Seeking to get back into it with something fun, I had a go at skirmish gaming the Prohibition era in 1920's America.

Constitutionally prohibiting the sale of alcohol from 1920 onwards achieved little other than a massive increase in disorder and corruption, whereby the intoxicants were supplied by ultra-violent criminals, and in more dangerous circumstances and quality. So just like the "war on drugs" of the last 50 years in many ways. However, in 1933 fact-based reasoning was more widely persuasive in the American political system than nowadays, so prohibition was ended in 1933 to near-universal relief.

But anyway, it's a fascinating period to game and we are well-served with figures, terrain and rules. I always liked Mark Copplestone's gangster sculpts, and the Pulp Figures range mixes in nicely. Great Escape games offer some buildings that are as nice as laser-cut MDF can be, even if relatively pricey. For rules, look no further than Howard Whitehouse's Mad Dogs with Guns, which are fun, workable and packed with atmospheric anecdotes. For a time I researched the period, learned all about the history, the buildings, the fashions, the vehicles and the characters, but the butterfly thing got me and I moved back to proper wargames periods, like the Franco-Prussian War. 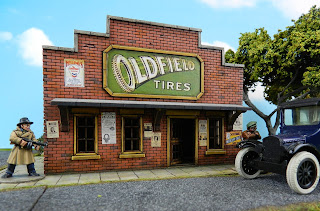 So here we are, livin in gangsta's paradise, so to speak, and something bad is about to go down outside the tyre store, a Great Escape Games building, although repainted and dolled up somewhat by me. Copplestone figures. The die-cast car is by Solido or someone. I got a few vehicles but didn't get as far as improving them significantly. 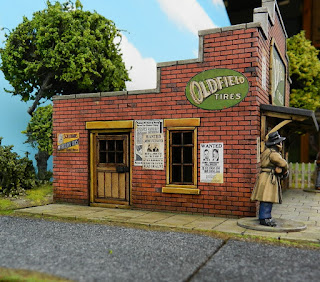 I made the tarmac road system myself, something we'll  come back to another time. 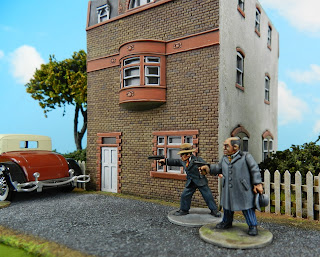 Here are some honest-looking US citizens exercising their constitutional right to bear arms. No doubt they will only be used against King George or any other tyrants seeking to repress their freedoms! This building is one I scratch-built, although using some bits from ancient US model railway kits. The brick walling is from the Wills sheets. 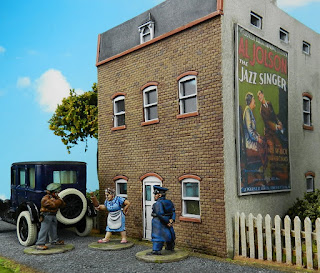 There's definitely a story in this vignette. "Bad day at the office; I couldn't even get the dough out of Mrs O'Hanrahan, and then a cop showed up!" At any rate, here's the other side of the above structure. The movie poster dates it firmly to 1927, so right in the middle of our period.
I did make a second building, better and bigger, but didn't quite finish painting it when the realisation dawned on me that I could make a dozen such structures and I still wouldn't exactly have Chicago, so I had to look for a more realistic approach. What I found was the Mean Streets range by The Virtual Armchair General. You buy PDF's online, which you print off on thin card, or else on paper and stick them to foamcard, as I did. The result is slightly brash but tolerable blocks of American city buildings for the era, each about 10-12 inches square. With these you can build up a useable cityscape, which I duly did. I haven't photographed them, as they are someone else's work really, but you can see them on TVAG's website Mean Streets Main Page (thevirtualarmchairgeneral.com). They also do an interesting set of rules "We Only Kill Each Other", for anyone sufficiently interested to try something more detailed and somewhat RPG-like.

Email ThisBlogThis!Share to TwitterShare to FacebookShare to Pinterest
Labels: America

A Batch of Trees

It's been a few weeks since my last post, when I usually try to get something out every week or so. But I have an excuse: the wargames rules for the Franco-Prussian War 1879-71, often mentioned, are now finished. All done, written, typed up and complete with explanatory diagrams. To be frank I am quite pleased with myself for getting going, and following it through a thousand amendments to completion. Anyone who's ever done this kind of big written project (24,000 words) will know it demands a high level of focus, because you have to, as it were, hold the whole thing in your head simultaneously: change one rule and it has knock-on effects elsewhere, which in turn can set ripples in motion at other points. The plan is to at least explore publication.

I have written rules decades ago (Seven Years War and WWII in particular), but I seriously doubted whether I still had it in me as I came up to my 70th birthday. So massive thanks to those who encouraged and helped in this project: Garry Broom, Adrian Hussey, Phil Olley, Nathan Paxton and Jonathon Marcus. Before this gets too much like a speech at the Oscars, I should say what sort of rules these are. They are aimed at covering the large, dramatic battles of the war, not generic actions with a few units each side. The emphasis is on command and grand tactics, and there is an innovative system of orders whereby you must make a battle plan, but don't have to write anything down or make little maps. We use 28mm figures, but any scale would work, down to 6mm. At any rate, if you are interested in this kind of game and period, just contact me and I will email you a free copy. If you then give me some feedback you will get updates and additions as they emerge.

Right, as some kind of pretext for the all this, here's some pictures of a batch of trees I made a few years back. Skirmish games were in mind at that time, so the bases are big and provide cover for individual figures. I have made slightly better trees a couple of times since, but the methods are only evolutions of those used here, which I have described in previous posts. In due course we will get to these other trees and eventually I will do a proper tutorial, because a wargamer can't have too many trees.

There's not much comment I can add to the individual photos, but two points might be worth making. First, for wargaming purposes, my view is we don't need to enter into individual species of trees for our little woods; generic is good enough in this instance. I like researching stuff more than saner folk do, but I have consciously avoided finding out the difference between an ash, an elm and whatever!

Finally I have used a method I developed for doing patches of long grass. We'd all perhaps use commercial long grass tufts nowadays, but for what it's worth, here's the method. The material is sisal string, untwisted and dyed fairly dark green in a pan with fabric dye (Dylon in the UK). You then attach it to the base one clump at a time. I experimented with different glues and found UHU worked best. Grasp about half an inch of the fibres between your left thumb and forefinger. Snip it off with scissors and apply a good blob of glue, using your right hand. Now push the tip of this tuft firmly down onto the base. You need it to stand up vertically before you let go of it, so hold it a few seconds if need be. Allow to dry very thoroughly. Now use a sculpting tool or something to splay the tufts somewhat and blend the individual tufts into each other a bit. Finally highlight by drybrushing with lighter greens. The method would work for very long grass or reeds, which are less susceptible to being represented by commercial tufts. Incidentally, even those tufts are greatly improved by drybrushing. 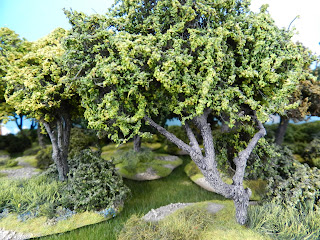 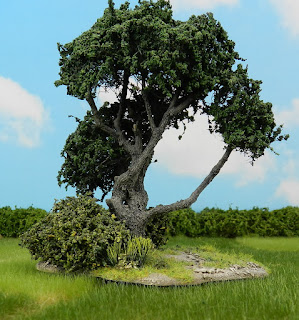 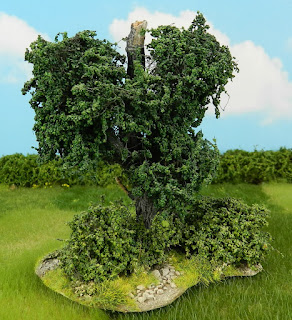 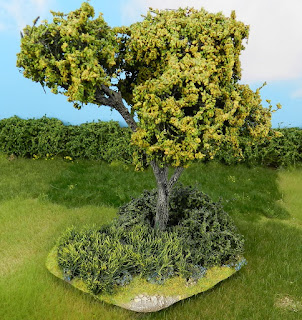