Here are two pictures of my terrain and figures which appeared in Wargames Illustrated back in 1989. Duncan Macfarlane (whose recent passing away I was saddened to hear of) used to come out to people’s houses to get his photographs in those days (provided you taxied him to and from the station, and fed him!) and he travelled to my house in Coventry in late 1988. We spent a very nice day, during which he painstakingly set up his arcane camera and lighting apparatus, and photographed just two scenes of my Seven Years War figures and scenery. One of them formed the cover of WI 18, Feb 1989 and the other was published in the edition a month or two later. It was a good moment to see my work on the cover in the newsagents.

Digging out those photographs for the blog I felt that the quality of Duncan’s photography stood the test of time very well, but blown up so large the quality of my modelmaking and figure painting in 1989 sets my teeth on edge compared to current standards! When he saw me at shows Duncan always used to say it was the best cover picture the magazine ever had, which was nice, although I used to suspect he “said that to all the girls”! He was a charming man, especially if he owed someone money! In all seriousness, Duncan did contribute massively to things by his photography and the magazines he established. His recent passing was a loss to our hobby community.

What these pictures show is figures and vaguely Germanic village units from my Seven Years War collection. The church was built with solid Linka walls with windows glued on the outside, a la Peter Gilder. The roofs are from the Wills sheets. One of the houses started life as an Airfix cottage!

These images are scanned from my old issues of WI and are of course their copyright, so I emailed Dan Faulconbridge the current editor to ask permission to use them. Not only was he fine with that, he asked me to write up this tiny reminiscence for the magazine where it will appear in a month or two's time, along with a plug for my blog. So that was all very pleasant, even if the correspondence knocked this post out of its chronological sequence, and scanner troubles meant there was no post on 17th November. As if it matters... 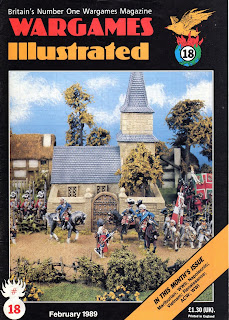 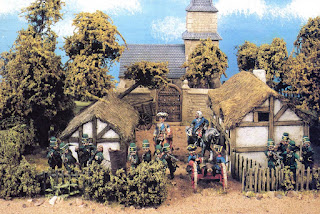 Email ThisBlogThis!Share to TwitterShare to FacebookShare to Pinterest
Labels: Germany