This post wraps up what I want to show in terms of the wargames road. This time we are looking at commercially bought latex roads, although I have improved them somewhat. I have got nothing against just laying out a bit of cash and buying terrain products when they are as good as I could do (or better), and will save me time. I did consider methods of making cobbled roads myself, and flattered myself I could have made masters, moulded them and "cast" latex roads in the same way as the commercial suppliers, but why bother when I only needed about 16 feet of them. So these are based on cobbled road sections produced by Early War Miniatures, which I chose because I liked the texture, but there are doubtless other makes equally good if you look around.

OK, it's time for another of my historical digressions I'm afraid. When I made the tarmac roads for the gangster era a few years back I researched the history of road surfaces, so to speak, because it seemed something that could be got right or got wrong, and because I do enjoy arcane knowledge sometimes. Obviously the "default" road up to the twentieth century was the unpaved, earth or "dirt" road, where the grass, etc was simply worn away by human and animal feet, plus the wheels of carts and carriages. Famously the Romans built many paved roads across their empire, which removed mud, puddles and the dust of summer. There were different systems, but all involved carved blocks of stone, so were extremely labour-intensive, often built by slave labour. Hence very few such roads were built again until something like the eighteenth century, and even then "chaussees" were few and far between, prestigious royal projects such as the "Kaiserstrasse" at the Battle of Kolin.

Around 1820 a British engineer called McAdam developed a method of building roads that was at least as good but much easier to build. It comprised basically layers of stone chippings, sometimes smoothed off with sand, and rollered smooth - it was what all those steamrollers were for. These "macadamised" roads spread rapidly across Britain and America, then other developed countries. So by the time of World War One, they were the main roads you would see, both in town and country. But motor vehicles forced another change, because their wheels sucked clouds of dust out of this type of road. So tar was spread on top, then very soon was mixed in with the sand and chippings to produce "tar-macadam", the "tarmac" roads that we see ever since the 1920's. The change was so sudden and complete that you can use it to date old photographs of your town or whatever: if the road surfaces are pale and dusty it's a macadam surface, so before about 1920, if it's dark and smooth it will be tarmac, so after that time.

Hence in terms of wargames scenery, you want mostly dirt roads with a few cobbled ones up to the Napoleonic wars. After that and up to WWI the main roads were macadamised, so would have a gritty texture and be pale grey or beige in colour. From the 1920's, tarmac is what you want. Knowing all this, I chose to ignore it for my Franco-Prussian War setup, because cobbled roads are much more widely useable for other wargaming periods! I might make some macadamed roads one day... 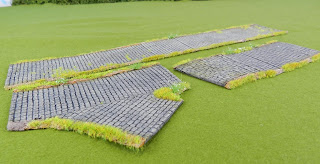 So here's the EWM cobbled road sections, their well-modelled texture brought out by multiple drybrushes. The "grass" texture moulded on the edges wasn't very good in my opinion, so I cut that down and also cut the roads to the same width as my dirt ones. The thick, rubbery material is really quite hard to cut. I found the best method was really sharp scissors, a tool that's worth investing in for all sorts of purposes anyway. I recommend Fiskars scissors, which are easily available online. 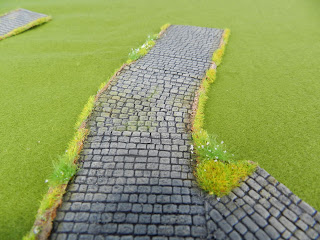 Between scissors and scalpel I managed to get  an undulating, chamfered edge, but the surface was unnaturally smooth and hard to paint. To get a better texture, I brushed on decorator's caulk with sand on top. This gave a rough texture which could be painted and have static grass added, plus it's flexible enough to bend with the road. If you bend it hard enough it will crack off in pieces, so don't do that! 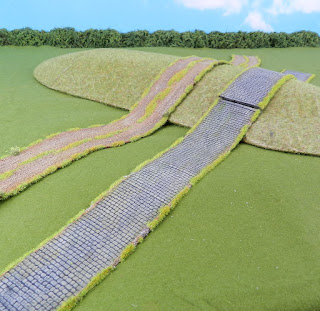 Both the latex roads and my felt ones will bend nicely to go up and over hills on the tabletop as you can see here, but they do it in different ways. The latex ones are heavy and soft, so they sort of "flop" into place. The felt ones don't do this but they are flexible. You bend them when you set them out and they will go back flat afterwards. If two sections meet on a hill, the felt roads go together better than the latex ones if anything. 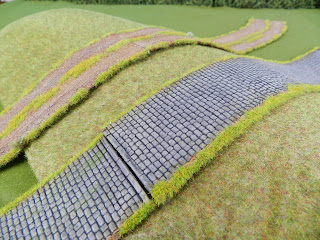