The first post was something of a test run, but thanks to those of you who have commented so kindly already. I'd like to take this opportunity to thank my friend Phil Olley, who has kindly spent hours of his time showing me how to set this blog up. Starting up a blog was one of my objectives for 2021, but it couldn't have happened without the encouragement of several friends, and Phil's knowledgeable assistance in particular.

My plan is to first work through posting pictures and a bit of comment on those models which I made for myself or others and managed to get photographs of. These go from early efforts back in the 1980's up to about 2009, when I ceased taking on paid commissions. The next phase will be to get myself taking photographs again so as to be able to show the models I have made between then and now, again with snippets of information on the subjects being represented as well as  how I went about them. When that is done I will hope to photograph future work stage-by-stage as I make it, which ought to be more helpful to anyone who'd like to try something similar. Somewhere along the way I will try to do specific "tutorials" on how I go about things, but also about the historical landscape- how to research it and try to represent it on the tabletop.

To get the ball rolling here's some photos of the fortified Swiss church I built for Simon Chick in the early 2000's. Some of the photos are mine and some by Simon, with his wargames figures setting the building off very nicely. The model was made as a couple of separate parts that can be used individually or together, and has had several "outings" in the demo games which Simon is often part of.

For those interested this model is basically made of three kinds of material. The walls are built of foamcard, the roofs are from the "Wills" range of model railway scenic sheets, and there are some parts where I made a master model, then moulded and cast them in resin. I have built up quite a stock of moulds over the years for parts like windows, doors, chimneys and roof formations. 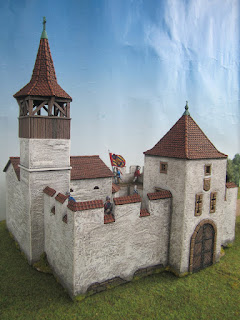 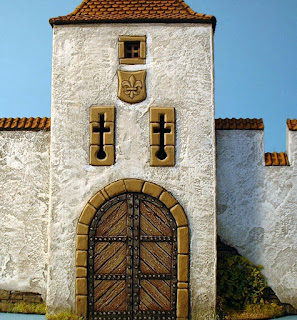 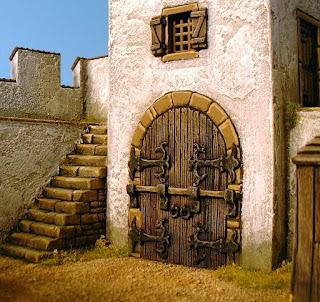 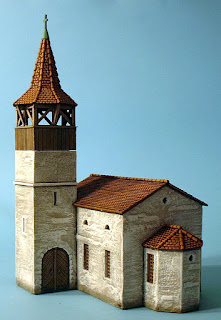 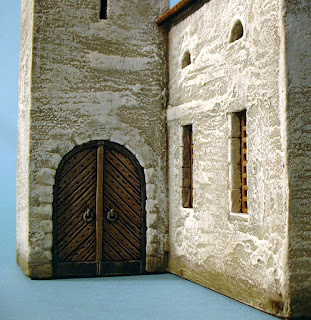 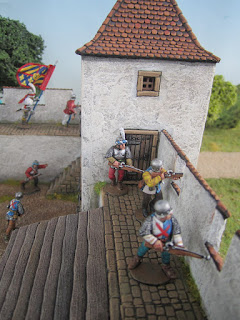 Email ThisBlogThis!Share to TwitterShare to FacebookShare to Pinterest
Labels: Switzerland